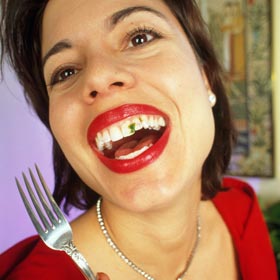 Recently, I found myself recalling one particular evening a few years ago.  I can’t remember if my friends and I were celebrating something or if it was just another night out, but we had gone downtown for a fun evening. We probably went for dinner between 8 and 10:30 and then went out for drinks and dancing. At about 3:30am we found ourselves at Fran’s Diner having – oh I don’t know – probably something like gravy laden open-faced turkey sandwiches or grilled cheese sandwiches. (That sounds about right for 3:30 in the morning!).

Here’s the part I remember clearly. The waitress was one of those classic diner waitresses who likely had been working there since well before I was born. As she was about to take my order she took a moment, looked me in the eyes, and frankly said, “Sweetheart, I don’t know what your friends have been saying to you all night, but you’ve got some spinach in your teeth.”

My friends keeled over laughing. Turns out they had been looking at the spinach in my teeth all night. At first it was just spinach, not a big deal. Then as time passed they each kept expecting the others to pipe in and reveal what was becoming an awkward issue. Then, as time passed, they didn’t know how to bring it up – as if it was getting more embarrassing for them to acknowledge that they hadn’t said anything.

As for me – OMG! We had met so many people! We were having a great night so I’m sure all evening I was smiling a big toothy spinachy-smile. I was mortified, not to mention super annoyed with my friends. Where was the trust? Where was the respect? END_OF_DOCUMENT_TOKEN_TO_BE_REPLACED