Recently, after a presentation to the Ontario Real Estate Association I was asked to discuss a few of the points that I’d spoken about for their pod cast.

Our conversation covered turning our dreams into goals, curiosity, learning, and the stress that accompanies all of these things. As we progressed, a short discussion evolved on how too often we let our experience actually block our advancement instead of supporting it. Finally we finish on one of my favourite topics… how I – an obvious extrovert – figured out that my introverted rowing partner, Kathleen Heddle, didn’t need to be vocal – like me –  to be extraordinarily talented – ( she was). I could hope that she would ‘throw me a bone’ but I had to learn not to expect ‘the bone’ that I wanted. When I did, and we learned to accept each other for who we were and what we had to offer, we became great athletes – world and olympic champions.

“In her interview with the OREA Centre for Leadership Development, Marnie explains some of the things she learned about achieving her dreams. “First all you have to do is put one little pinhole, one little waypoint, between who you are today and who you want to be tomorrow. As soon as you have one waypoint, you have a path. And as you start going along that path you will probably put in sometimes hundreds of waypoints between you and the goal you want to achieve.” 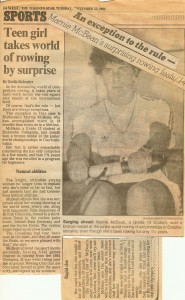 What makes you great as a start-up rarely keeps you great for your career.

In the next year – Olympic selection, qualification and ultimately the competition won’t be easy, but you are on the right track. Last year Canadian athletes collectively won 26 World Championship medals, 7 of which were gold. This should feel good.  With only 4 events left to be contested Canada is ‘on the podium’, just 1 medal behind Germany and 8 behind Norway. ( M & W Ice Hockey, M Curling and Mixed Team Figure Skating remain.) When I watch athletes who dominate their event it seems as if they know a secret to winning that allows them to put their hands firmly on the wheel. It is as if these athletes can control and steer towards more and more success. You may have felt this: When you know the secret – it feels great.

When I tried out for my first Olympic rowing team I was young but boldly confident. I had a bronze medal from the Jr. Worlds, an erg (rowing machine) score that ranked me with the women who were on the Sr. Team, and…I thought I was great. It turned out, in hindsight that I wasn’t.

When I was cut from that Olympic team the coach told me that he was “glad” that I didn’t make it (as you can imagine, I’ve never forgotten that part). He went on to tell me that the Olympic Team was not the place to learn how to be good, but the place to learn how to win. At the time I didn’t understand what he meant – but it was the best kick in the ass I ever got. He told me to go home and focus on the basics.

Pissed off – I went home intent on proving him wrong. END_OF_DOCUMENT_TOKEN_TO_BE_REPLACED