An In the Spotlight interview on the Special Olympics Canada website

The Olympic champion is gearing up for her latest leadership role as Honorary Coach for all 109 athletes on Special Olympics Team Canada for the Special Olympics World Games Abu Dhabi 2019, taking place in the United Arab Emirates March 14 to 21.

“I really want to bring my experiences of working with generic, high performance athletes and continue that on and pass the same knowledge through to the Special Olympics athletes,” McBean said. “They have the same fears and doubts and confidences that any other athlete I’ve ever worked with has.”

While it’s McBean’s first time as Honorary Coach at the Special Olympics World Games, she’s been involved with the movement since the early 1990s.

According to McBean, once she started to bring home medals from the Olympic Games, she was asked to attend a lot of events – and Special Olympics Canada events were her favourite, because she loved meeting the athletes.

“That sort of interaction always made it just so lovely and real,” she said. “I got to see them and their joy and as much as I was being asked to come and share my medals and my experiences – they were always super quick to share their medals and their experiences too.”

As Honorary Coach, McBean – with 3-and-a-half-year-old daughter Isabel in tow – has visited a number of Special Olympics Team Canada training camps over the past few months to offer words of wisdom as athletes prepare for the world stage.

She’ll also be in Abu Dhabi for the nine-day competition, offering inspiration, insight and, of course, to cheer on the team.

With less than 30 days until World Games kick off, McBean has three main messages for the team:

1. YOU ARE THE ROLE MODELS NOW.

In every speech she’s given so far, McBean assured Team Canada athletes they no longer need to look to the Champions Network – a group of Canadian celebrities and professional athletes, including McBean, who help promote the movement – for inspiration or guidance.“They are becoming their own Champions Network – they are community role models now,” she said.

“For the last year or more they’ve been working on their competence and looking at all the things they need to do better,” McBean said.

But now is the time to shift that perspective.

When they arrive in the UAE, Team Canada will look at their competitors and notice everything they’re doing right, she said, so they need to do the same for themselves.

“An ambitious person will always feel that there’s more to do,” she said. “That’s good to think when preparing, but a bad thing to think in the middle of a competition.”

“From now through to the Closing Ceremony, the consistent message will be to focus on our confidence and everything that we’re doing right – because we are prepared.”

McBean cautioned athletes not to have “blinders” on while in the UAE.

“Have fun and be eyes open and meet people,” she said. “Take in the experience of travelling all the way to Abu Dhabi – there’s a lot to be taken in in a non-sport sense.” 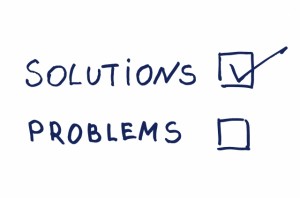 In many different ways I’ve written about being open to new ideas and change. In my book I shared a story about snowboarding through a gladed run. This particular story spoke of the importance of looking and moving to the spaces around the problems and not looking at the problems themselves. If you want to hit the trees, I concluded – look at the trees. If you want to ‘hit’ the fresh powder, well then …(For that full story click here, but I’ll also put a link at the end of this message.)

Previous to this post, I’ve also written about the value of being young and naïve vs. well seasoned and experienced. I have found that it’s not uncommon for experience to sometimes act as a burden when it comes to problem solving. When we think we know it all we start to become those who know less and less. At some point, because of our experiences, we inadvertently become closed off to challenge of new or changing ideas. That’s when we hear from others, or think to ourselves, “I’ve been doing it this way for X number of years – why would I / should I change?” Our well-honed routines provide us with the comfort that we know what we are doing but they put us at risk for becoming less curious about what we could be doing differently.

So, I come back to my opening remark; do you look for solutions to your problems, or END_OF_DOCUMENT_TOKEN_TO_BE_REPLACED