Then I dug into the numbers…  END_OF_DOCUMENT_TOKEN_TO_BE_REPLACED 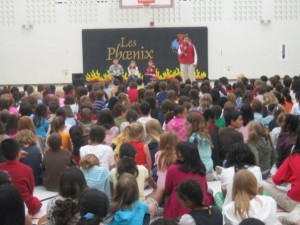 I’ve seen acts of focus, strength, kindness, bravery, generosity, humour, intelligence and thoughtfulness that have inspired me. I have tremendous admiration for those who have built and demonstrate strong, loving and lasting relationships. I want and hope for all of that. I watch people who demonstrate these traits and, when possible, I try to emulate them.   END_OF_DOCUMENT_TOKEN_TO_BE_REPLACED 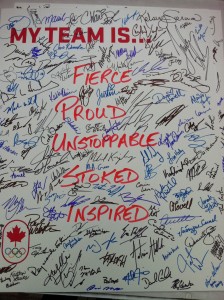 Recently I was part of a conference that the Canadian Olympic Committee hosts as part of the Team’s preparation for the Olympics. Other that the fact that most of the attendees are young athletes who are the best in the world at what they do – this conference is no different than the countless conferences that I have had the opportunity to speak at over the last 15 years.

The idea is that a group of people, with similar (not necessarily the same) tasks come together to learn, be inspired, network and with some luck have fun. Talk to anyone who’s just back from something like a TED, Oprah or Incredible Lives Conference and their life is about to change! They are on fire!

Kick starts are amazing – but we can’t expect that kind of rush every day/week/month. Ultimately we need to be our own somebody, our own key note speaker…our own source of inspiration. This month, in my regular message to athletes preparing for the Sochi 2014 Olympic Team, I address that kind of amazing rush and the importance of using the team that is around you (close and far) to help you keep your own fire burning.

The OES Sugar Rush – After the conference

The Olympic Excellence Series Conference came to a successful conclusion on May 12th. The feedback that I received directly from you was that you had an awesome time! Inspiration, motivation, team bonding – shared experiences and emotions…wow- what a rush– you are part of a TEAM! What a huge relief. What a huge motivator.

It’s true that when you compete you will, to varying degrees, have to do it alone – but, waiting to begin that performance can be nerve wracking which can be de-railing. That’s why feeling part of a larger TEAM is so comforting and integral to your Olympic preparation. Your TEAM can help keep you on the rails until it’s time for you to do your thing. END_OF_DOCUMENT_TOKEN_TO_BE_REPLACED