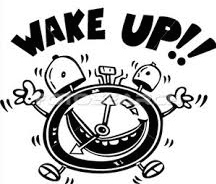 Waking up early one day, or even every day for one week is not a routine it’s a novelty. Doing something for 1 week is END_OF_DOCUMENT_TOKEN_TO_BE_REPLACED