Soon I will go to Sochi to continue my work as a mentor to the Canadian Olympic Team. It will be the ninth Olympic Games that I’ve attended, my fourth as a mentor. I’ve been working with some of the Canadian winter athletes since before the 2006 Torino Winter Olympics and I’ve watched them mature from wide-eyed Olympic rookies to Sr. veterans, multi-medalists and Olympic Champions. They have become fabulous athletes and community citizens: there are so many incredible career champions among them. They now, are the role-models and mentors and I am so proud to have had the chance to work with them.

While in Sochi there is no plan for me to be on TV; I’m not there to be a spokesperson or an analyst. My role is to continue to be part of the Canadian Team’s preparation. Much of what I do is subtle and behind the scenes. All the athletes have access to professional mental performance consultants (often sport psychologists) that help them with specific field of play issues. They have coaches and team mates who are with them and support them daily. The mentoring I do is done in broad strokes; I pop in and out of camps and meetings, I send emails, or we exchange txts. I know I don’t connect with everyone on the team but that’s okay, everyone wants and needs different support and guidance. Often I explain my role like this- I offer to take the horses to water; if they drink, or how much they drink, is up to them. Throughout the year I am one of their many resources.

When I first started going to the Olympics in this role it was a huge shift for me. To be frank –

END_OF_DOCUMENT_TOKEN_TO_BE_REPLACED 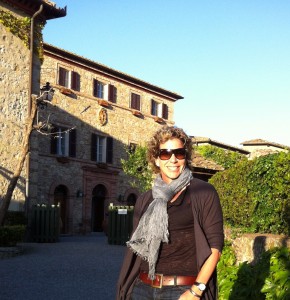 So here I am in Italy having an amazing time. I wake up, eat a fab breakfast, go for a 3hr bike ride that usually includes at least one doppio espresso macchiato and then return to our gorgeous resort-Borgo San Felice. A short bike ride somewhere for a 3hr lunch of caprese salad and a pici pasta and then back for a rest by the beautiful pool. In the evening – if Jim Cuddy isn’t leading us through a wine tasting we go for more delicious food and local Chianti region wines. After dinner Jim, his son’s Devin and Sam and/or Barney Bentall jam at the hotel bar piano. It’s almost too much dolce vita… but then I don’t think there can ever be too much of that! I’m so so lucky. END_OF_DOCUMENT_TOKEN_TO_BE_REPLACED