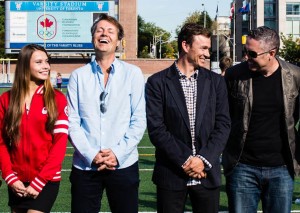 Yesterday, with Jim Cuddy, Ed Robertson and Simon Whitfield,  I was part of an announcement that will hopefully effect the health of the Canadian high performance sport system. But I’m hoping that it will effect more than that – way more.

The Canadian Olympic Foundation, in partnership with Gold Medal Plates has announced the creation of the Future Olympians Fund. The target is to raise $4million in 4 years and for that money to help young emerging athletes bridge the gap that exists just below the financially supported National Team level. This gap has been getting bigger and bigger as municipalities and provinces give less and less funding to sport and activity programs. In the increased absence of funding at this level – there are fewer and fewer canadians being taught sport at much more than rudimentary and recreational levels without a significant investment by their families. To often that becomes exclusionary.

I’ve explained the existing problem – somewhat colloquially  – like this… If Own the Podium is able to support teams/athletes who are Top 10 (in the World) to become Top 3 and to win… How are athletes expected to get to that Top 10 Level? The flow of developing high performance athletes filling the pipeline from playground to podium is critically low, and with a weak base the likelihood of sustained success at the top becomes less and less foreseeable .  This Future Olympians Fund is intended to support the Canadian Sport Institutes and change that.

“Why Sport? Shouldn’t I be giving to healthcare, education or community programs?”

But there is a bigger picture… I often get asked -“Why sport?” as in “Why should I financially support a bunch of athletes who are traveling the world and chasing their dreams? Shouldn’t I be giving to healthcare, education or community programs?”  At first I didn’t know how to respond, those are really important and essential things. As I matured and listened to people telling me what my influence, and the influence of my peers, has had on them – I came to a response that I am proud of.

People have told me (or my team mates) ;

That is the influence that Canadian athletes have on Canadians. – That’s the REAL value of high performance sport.

Speaking for my Olympic peers and all the athletes that I work with – who are preparing for ALL of the upcoming Olympic Games – thank you for your time, your efforts and … your money. Together we are building a better, healthier, prouder Canada.

2 thoughts on “Why Fund sport.”