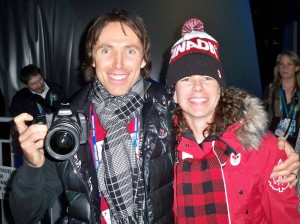 I was pretty happy to say hi to Steve behind the scenes at the Vancouver 2010 Opening Ceremony. Later he would be one of final 4 who would light the Olympic Cauldron

In 2012, Steve Nash wrote the the foreword to my book, The Power of More. I remain so grateful to this amazing Canadian. This week we learned that he has retired as a player from the NBA. In an article about Steve’s incredible legacy, The Globe and Mail columnist, Cathal Kelly wrote, “At 41, Mr. Nash had fully inhabited his imaginative space in NBA history. He was the skinny kid from Nowheresville (i.e. anywhere in Canada) who’d willed himself to the very top. He was a guy who’d outsmarted the game.” (full article)

Steve’s ability to “will” himself to the very top was because he, as he wrote in my book, believed in  “taking the time to lay out your path in measurable steps, a practical approach can instill a beautiful confidence that comes from knowing you can actually achieve what you’re setting out to do.”  Steve’s incredible work ethic is legendary – he always broke things down to their base details, drilled on those details until he mastered them and then used them to his greatest advantage. As Mr.Kelly also wrote “What Mr.Nash did in his prime…was marry the cerebral with the kinetic. His primary gift as a player was that he thought at speed. That’s what the best players do in any sport. They slow then bend time.”

Anytime you set a goal for yourself, you create the possibility of success; with Marnie’s book, you also create a plan to see it through.

When I was writing my book, The Power of More, I can’t tell you how thrilled and honoured I was when Steve agreed to write the foreword. Of all the global champions that I know from professional and olympic sport, and all the philanthropists, business people and politicians who have made their incredible successes seem easy – Steve was my first and best choice to ask. Knowing his attention to detail and dedication, I was sure that he would also embrace my concepts of breaking things down into manageable steps – and he did, and still does.

Steve’s foreword wraps up with him saying, “It teaches you that you can be excited about what comes next, and that you get to dictate so many of the terms for yourself. So read it, and then, as Thoreau said, “Go confidently in the direction of your dreams.”” Well Steve, I hope the same for you now.  I hope that you will be excited about what comes next.  Like the mythical phoenix (Phoenix Sun ?), from the ashes of the “1st death of an athlete” will rise something spectacular. Once you figure out the terms that you want to dictate to yourself – go confidently – I’ve no doubts your next career will be something pretty awesome.

Good luck and – thank you Steve.

Here is the foreword that Steve wrote for The Power of More – How Small Steps Can Help You Achieve Big Goals.

I’ve known Marnie since I was a teen, when she was training at the Victoria City Rowing Club in my hometown, and I’ve run into her at two Olympics since. Marnie isn’t a multiple gold medallist by chance. As this book describes, she’s created a methodology for success that matters. It matters because it sets out the steps needed to get to chosen results. And in Marnie’s case, those results are pretty impressive.

Marnie’s someone who really exudes confidence. But she’s not ego-driven. She just knows the time and effort she has put into determining and reaching her goals, and therefore the likelihood that she’ll be met with success. As a fellow goal setter (and a too-short-for-my-chosen-profession professional) I get it. A lot of people have heard the whole “underdog” story about my “improbable rise to the NBA.” There’s a book about me called “Long Shot.” (I think there’s a compliment in there somewhere.) But if you talk to the people closest to me, they didn’t have that same “that’s impossible” attitude toward my ambitions, and they didn’t think I was a nutter or an ego maniac for having them. And I think of a lot of my experience is explained by what Marnie writes about here: I had a realistic picture of what would be required to make it to where I wanted to be, and I went about it practically enough that it seemed less outlandish (not not outlandish, but less so) to those who knew me best. (It’s also entirely possible that they just didn’t know any better, and were just agreeing with me to be kind.)

That’s a big part of any success: deciding on your aims, making a plan, mapping that plan from start to finish, and, along the way, conceptualizing the realities of what’s entailed – whether it’s time, resources, personal support, or other factors – in starting out. People often equate being practical with being conservative or unambitious; it doesn’t have to be. Because you’re taking the time to lay out your path in measurable steps, a practical approach can instill a beautiful confidence that comes from knowing you can actually achieve what you’re setting out to do. Sure, fate is always going to jump in and throw you a freak snowstorm or some other mischief, but being attentive to and thoughtful with your planning is paramount to getting where you want to be.

Marnie and I are both athletes, but our life goals aren’t limited to sports, and this book isn’t about physical feats. “Where you want to be” can mean anything. The tools Marnie sets out here can be adapted to any environment, dream, or hope, which makes this such a useful guidebook. Your own goal can be as spontaneous or inventive as you are, or as simple as “I’m going to keep this pace until I get to that tree” or “I’m going to work on this creative until I have five ideas that I really love.” Sure, it can be a game within ourselves, but it’s more than a mind trick. It’s success at play. And the funny thing about goals is that you’re really the only person who knows whether you can achieve them: you know your strengths, your weaknesses, and how committed you are to the work of making your goals happen. Anytime you set a goal for yourself, you create the possibility of success; with Marnie’s book, you also create a plan to see it through.

What I especially like about Marnie’s approach is her direction for the tough spots. Success does not always come easy. As an athlete, I’ve played at various times in my life with less-than-ideal conditions: flu, a broken nose, a swollen-shut eye, a cut-open face, a sleepless night spent with a toddler (albeit absolutely adorable) who woke up at four am and just felt like chatting with her old man for the next three hours, and a degenerative back condition that rarely seems to care about my plans for success. Yet what I need to do performance-wise on a given day doesn’t change. Marnie looks at those “bad days” with the same practical approach that shows how to make them work, how to play through with the same positive outlook that comes easily on the good days.

The Power of More, as the title suggests, also has something for those among you who have already accomplished many goals. Marnie’s strategies for digging deep to find the next objective and create a plan for it will keep you inspired and driven for years to come. Maybe for Marnie it’s making the Olympics in another sport (just kidding –but don’t put it past her); maybe for you it’s learning a new language or communicating more effectively with your significant other. This book really has something for everyone who is interested in how to get more out of themselves, and more out of life. It teaches you that you can be excited about what comes next, and that you get to dictate so many of the terms for yourself. So read it, and then, as Thoreau said, “Go confidently in the direction of your dreams.” If knowledge is power, this book really is the Power of More.