Winning my third gold medal wasn’t the same thrill as winning the first but that doesn’t mean that it wasn’t still fun to do. I had to learn/accept that it was just different. As a career matures, so must ones understanding of where the ‘fun’ comes from. If you think your career is void of joy chances are you’ll start feeling as if you’re grinding away, stuck in a rut and missing out on something. If you know how to find the joy in your career, even as that joy manifests itself differently over time, chances are you’ll remain curious, engaged and moving forward – and forward is fun!

Recently, when I was putting together a 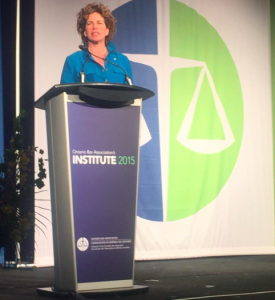 presentation for the Ontario Bar Association (OBA) I wasn’t convinced that talking about Starting Happy so that you can Finish Happy would entice a bunch of lawyers to come to the luncheon where I was to speak. This topic isn’t about trying to be all skip-happy with a giddy smile but upon introduction it might sound that way. It is a discussion about confidence in your preparation, dealing with hard conversations, anticipating change and challenge and knowing that you are the ‘someone’ that you’ve been waiting for. These four pillars create a “Start happy” foundation that is likely to lead to accomplishing your goals thus “Finishing Happy”. Still, I felt that idea of a discussion of being happy wouldn’t draw the lawyers in.

I then considered going with my core message, which is about a relentless pursuit of more. I was pretty sure that if I came at the lawyers with a presentation on doing more I’d lose the room too. This is a group of people who pride themselves on an extended and grueling education followed by a career of long days often clocking 60hr workweeks. If I pushed ‘more’ on this group – they might start throwing their buns at me!

The Start Happy/Finish Happy presentation had come from a conversation that I’d had in Sochi, which turned out to have a great impact on more than one person. I often use moments like that, concepts or ideas that come from interactions with ambitious driven people, as the foundation for the various speaking presentations that I give. The concept of more was no different. It came from my own experiences and was reinforced over the years by observations and conversations with many athletes that I’ve worked with. The idea is that when you’ve ambition to achieve a goal, when you get to that point where you think you’ve done everything, there is always a bit more that you can do; do more, be more, try more, learn more. But happiness and more just didn’t seem to be right to use as the framework for my OBA presentation.

Both concepts ‘Start Happy’ and ‘More’ apply to lawyers as much as anyone but I wanted to come at them from a different angle. So my brain stepped back from lessons that I had taken from isolated moments and considered my whole career of observed (and experienced) moments. It was one of the first times that I’d looked at it that way and I was struck by a sort of a-ha moment.

Considering personal lessons that had occurred as my own career progressed (as an athlete, as a mentor and even as a speaker) as well as the many interactions that I’ve had mentoring 5 Canadian Olympic Teams (COT) it was as if the lights got turned on. As I considered the progression of conversations that I’ve had with all the ambitious, high performance people that I have followed there is a consistent pattern in the development of their very successful careers and this pattern breaks down into two phases.

The first phase has a need for reinforcement in self-belief. Typical conversation: “You are exactly the kind of person that success happens to.” The second phase is a harder to encapsulate because these interactions are more complex. In this phase, performers must manage the shift from the excitement of chasing to the stress of being chased. They must figure out how to stick to the skills that got them to the top but at the same time the need to reinventing oneself to raise the bar again and stay there. Typical conversation: “Just because expectations are high and it feels different (more like work) doesn’t mean you’re on the wrong path.”

In the early stage, or rookie phase of our career, success is fun to chase; learning is exciting and accumulating titles and wins for the first time is a rush! The joy and fun at stage of your career is easy to feel, but this is also when we are most likely have doubts like “who am I to be doing something so great?” (Note – Just because someone is an early stage of their career is not to say they are a beginner or unskilled; an associate lawyer is not yet a partner, and a resident MD is not yet an attending but they are highly qualified. Some of the Olympic rookies that I have worked with have been World Cup champs, X-Games champs and even multiple World champions. They have a tremendous amount of experience and success in their field just none on the Olympic stage yet.) Making the mental crossover from dreaming of success to expecting it for the first time can cause some mental turmoil. In the Olympic environment, we are brought up watching people who seem like ‘superheroes’ winning gold medals. It can be quite the leap when you have to convert the mentality of a goal that seems audacious into a doable one for someone like you.

That’s why the first phase of conversations and observations is steeped in affirmations like; it is ‘normal’ people – just like you – doing special things, or you are okay if you’re stressed or even scared. Fear and doubt are normal parts of every ambitious path; do not let their presence deter you from your goals.

Typically conversations that group in the second phase are with performers who can be described as veterans. They have experience and/or success. As often as not, chats with this group are simply a search for joy, or more accurately –where has the fun gone? If their first huge success, an Olympic win, was preceded with joy and excitement was it possible to win again if that joy was diminished?

I think it was becoming aware of the consistency of the conversations for this veteran group that caused my a-ha moment. You see, very often this group gets somewhat ignored on the mentoring scale. They’ve had success, they know the ropes – the assumption is that they are fine. But that is a mistake that is too often made since we all know everything changes – including the ropes! This group of performers is searching for something; it’s just that in this phase of their career it’s different than before.

Through the years that I had mentored different Olympic teams I came to realize that if our goal was to increase the number of medals that Canada was winning at the Olympics then our biggest return was to help our returning medalist become repeat medalists. In no way did this mean we neglected the rookies, but as we got smarter about who we worked with the team started to do WAY better. We had stopped neglecting the vets.

As careers progress I’ve noticed that the stories, recollections and lessons become increasingly complex. As our career and goals mature there is an expected increase in responsibility, multi-tasking, and expectations. From many of the conversations that I’ve had, and considering my own career through 4 different Olympic quadrennials, it appears that as the sense of expectation, self-expectation and expectation from others goes up the sense of joy and fun seem to go down. To often the rush from repeating wins and titles diminishes as we mature, and the excitement from learning and even the drive to be curious all but disappears. What was fun became work, aka – the grind.

Performers in the second phase didn’t need affirmations that they could achieve success; they needed a bit of help to reframe where the fun came from as their career advanced. Oddly enough, it was their experience and success that often contributed to the missing joy in what they were doing.

As our career matures experience suggests to us that we know what we’re doing so we stop being so curious. After all, as a young performer we learned that curiosity can lead to dead-ends, mistakes and wasted time; why not just stick with what you know works? And – we gained enough confidence as we climbed the performance ladder that we feel comfortable starting hard conversations but – we become less inclined to listen to hard conversations and take critical feedback: this might imply that we’re not an expert in our field. As for stress or doubts– not that you have any anymore (at least never admit that you do!) You can manage this easily – on your own; no need to share what your thinking or feeling with others because that might imply that you’re struggling, or even worse – that your previous success was might have been a fluke.

If you’re honest with your self, you’ll admit that it was from those very things, curiosity, accepting critical feedback (actually being hungry for it!) and accepting/embracing stress that you used to find all the fun. “Back in the day…” the fun may have seemed that it was in the big things— the big objective wins—but now that you’ve matured, you know that the rush comes when you let yourself be challenged (and scared) by these little things. When you remember that, you put the fun and happy back into your day and a desire for more is clearly on your horizon.

A career doesn’t have to (shouldn’t!) feel like a grind; the best ones don’t. The presentation that I gave to the OBA ended up being a little bit about both happiness and more, but was framed around how those two concepts mature as you do.

Being Happy is absolutely essential to achieving more – but what happy looks and feels like will almost certainly change as we progress through our career. Work doesn’t have to feel like… work. There is no denying the fatigue and frustrations that will be part of a busy and challenging life but it should also be fun.

At the OBA conference, for first time since I’ve been talking about my experiences as a mentor I didn’t speak about a mentor moment – I spoke about a career of mentoring – and mentoring careers. I spoke to this group about mindset at different stages of ones career, and I loved it, and so did a hall full of lawyers.

“Marnie was a huge hit at the OBA institute meeting. When Marnie spoke you could have heard a pin drop. You really feel she speaks from the heart and has such great presence on stage. She was riveting.”

1 thought on “As Your Career Matures, Anticipate That The Fun Will Too.”