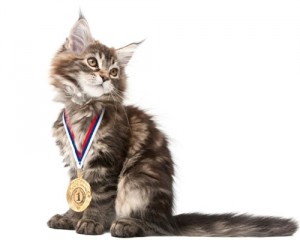 Putting a medal on a cat might seems way easier than putting jam on one – but the ‘jam’ has to come first!

After a conversation with Matt Galloway, the host of CBC Radio’s Metro Morning ( Toronto, RadioOne) a podcast of our conversation and this article was posted on CBC Books web site. Their title is partly right… but the truth of the “Jammed Cat” is that it helps anyone achieve any goal, big or small. In no way is the Power of More about Olympic size goals only.

How to win an Olympic medal with a jammed cat

One day, McBean’s jam-covered piece of toast fell, she told Metro Morning. Of course, the toast fell jam side down. It always does. Most people, would make a new piece of toast, but McBean started wondering if there was any way to stop the open-faced sandwich from falling that way.
“What happens if you put jam on the back of a cat and you dropped it?” she said. “It would never land … like a perpetual motion type of machine.”
She let the idea go, but it came up again when she started working with other athletes, mentoring and preparing them for the Olympic games. She realized athletes are often happy with their performance, but unhappy with the overall result. Imagine logging a personal best for a marathon, but not placing in the top three.

“So the idea of a jammed cat is that in the presence of ambition — in a very healthy way — we just always want to achieve a little bit more, and we keep spinning,” she said. “Our cat, which is our goal, never quite lands until we’re prepared to take the ambition off of it.”
McBean is the author of The Power of More: How Small Steps Can Help You Achieve Big Goals — a topic she knows lots about. Growing up in Etobicoke, Ont., McBean was a self-described couch potato, vegging on her sofa at home and watching up to eight hours of TV a day. “But one day, I learned to row,” she said, explaining her path to success. “And the next day, I wanted to row better.”
She advises people to break down their goals, making them small steps to a large accomplishment. Picture yourself today, she says, and then picture who you want to be in the future. Start connecting those two images with other pictures, creating a photo album of smaller goals.
“Simply close the gap between the picture of you today and the picture of [who] you want to be tomorrow.”