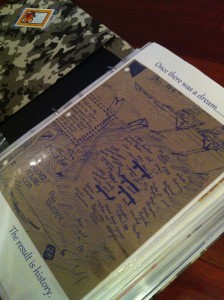 “Once there was a dream… The result is history”

My mom gave me an amazing gift for Christmas this year. It’s the most incredible book/binder that includes all the press clippings that she had kept from my entire rowing career.

Apparently it’s been her project for months. She was working on it all summer: sorting, cutting, compiling…. From the scribble page in my high school note book that was and ode to the sport I was just learning in 1986* (!!!! How did she find THAT!), through Jr. Worlds, rowing/awards at Western University, Sr Worlds, PanAms, Commonwealth Games, Olympic Games, Arctic adventures, snowboarding, triathlons, fundraising, sponsorships, profiles, Kilimanjaro climbs, awards, inductions, Olympic bids, PanAm bids, civic/ambassador events, job announcements, car articles, home reno articles, more fundraising, mentoring and … finally my book launch in 2012. Coopers and Lybrand, Timex, Pert Plus, Milk, AT&T, Avon, Pepsi, Zurich Financial put me in some incredible campaigns. Each clipping she included shows the date, and which newspaper – usually via a clipping from that days newspaper.

There is stuff I forgot and pictures and articles that I never saw. There are event, sponsorship and promotional notices that I would never have kept – but are kind of cool to see again. (Not to mention a crazy collection of long hair, straight hair, curly hair, pony tailed hair, short hair, and …very often messy hair shots)

It was all from “that” pile of newspapers and magazines in an armoire – often referred to as ‘old crap’, because quite honestly – that’s what it looked like. It looked like nothing… until my mom brought out all the little bits that counted to her… and to me.

I can’t believe the incredible list of journalists who continued to pop-up throughout the 26 years that this book covers. It brought tears to my eyes to see how much of my life the late Randy Starkman (Toronto Star) had documented.

It was an incredible effort by my mom- but who is fooling who?! An athlete’s career is their parents’ career too. My parents believed in me, supported me, encouraged me and cheered for me. They were rocks when I struggled, my number one fans regardless of my results and my constant resource to share my unfiltered emotions. (You want to know what an athlete REALLY thinks – their confidence, their frustrations, and their fears?? Ask their parents!!)

* included with the limited number of rowing words I knew in my first year of rowing is this little gem of a self-promise…”I will one day go to the olympics and represent my country in the rowing events. Myself and my friends and my country will be proud.“

2 thoughts on “My Rowing Career in a Book: My mom’s incredible labour of love”