thx to Catherine for this early picture to share here!

This is definitely the type of post that should have lots of pictures but I’m going to wait for the good ones!

Sunday April 6th –  was an incredible day. Deanah Shelly and I got married.

It started with a crazy idea way back in December: “Why not have a surprise wedding?!”

I’ve a life philosophy that one should surround herself with talented people and then seek and take their advice as much as possible, so when my good friend Catherine Farqaharson, a fabulous photographer who has been to countless gorgeous weddings, said that she LOVED the idea – the crazy idea of a surprise wedding became a real plan.

This wasn’t to be the “normal” surprise wedding where the guests arrive to what they think will be just a dinner party or just a bbq only to realize that they are at a wedding, but rather the kind where one of the brides(!!) arrives to what she thinks will be just a brunch. I’ll tell you, planning a wedding really isn’t so tough – it’s keeping it as a complete surprise from one of the brides – that’s what adds quite a twist!

Deanah and I have been engaged for over a year and a half – and while we’ve talked about locations, seasons, guest lists, style, form and function… we could never get even close to picking a date. From the day you tell people that you are engaged the next question is always, “When’s the date?”. It was starting to become a sensitive subject for us because everyone asks when? and we continued to have no answer.  West coast? East coast? a destination? Summer? Winter?  With respect to our guests there could be health and accessibility issues – so how do we pick when and where? In trying to please everyone we could not decide on anything.

So I jumped in. I didn’t tell Deanah – but I jumped waaay in. I decided that I would take everything we had talked about and pick a date.  First on the list of things to do  I skyped Deanah’s parents (on Jan 7th)  and once they (very quickly) got over the shock – they loved the plan! phew.

They nudged me a bit and actually changed the date that was first had in mind. This ended up being a blessing as that first date was going to be Feb. 2nd and would only give me 3 weeks to pull the whole thing off. Moving the date was probably the sanest part of the whole plan – since I had to go to Sochi for almost two weeks in February and we had friends and family who were going to be flying in from Vancouver, Grande Prairie and as far as Shanghai! By Jan 28th (my birthday!) we confirmed that the big day would be April 6th and I got right to work.

I’ll jump right to the end now… because I’m sure I’ll write more when I get some the photos from Catherine – Deanah thought she was going to a celebration party for Tessa Virtue and Scott Moir, kind of a wrap-party to their tv show. I thought this plan up because a) I love working with them, and they are so wonderful to me that Deanah loves them too, b)not only do they always look gorgeous but figure skaters have some great dresses, and I needed Deanah to want to get a new great dress, and c) they have had a TV crew following them for a TV show so it was easy to tell Deanah there’d be media and cameras there so we’d have to put a little effort into our hair and makeup. [Tessa and Scott really were included. It was a fun conversation to bring to them, just days before they competed at the Sochi Olympics – it’s a pure joy happy story that had nothing to do with the Olympics – and stories like that can be a great distraction! Tessa would even help me out later, sending us an email with an invite and all the details for “their” party.  Thanks Tessa! (funny – I had a few guests ask before the event if it would be okay if they asked T&S for photos and or autographs. Sure… but I was pretty sure they would actually be in Japan!) ] 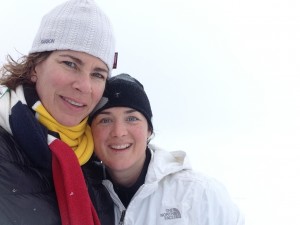 For Deanah the morning was a normal Sunday; a slow wake up, a bit of breakfast and then we walked the dog. As we walked the dog I knew our bridesmaids were already setting up the venue, Archeo in the Distillery District. As we showered and changed I knew all of our guests had already arrived, and as we got in to the car that I’d arranged for a car to pick us up, (she thought that it was sent by the producers of the Tessa and Scott TV show!) I knew that we’d be married within 1.5 hours, and wouldn’t be back home for at least 30 hours. Deanah thought we’d be home in a few hours so she was suggesting some tasks we could do later that day, and we even discussed getting married in Whistler between Christmas and New Years.

There are countless funny details, but the best part was watching Deanah take in the room as we entered. Expecting to see Tessa and Scott, she couldn’t figure out how her friend Tanya “Smitty” Smith, a corrections officer, knew the two figure skaters. Then she kept looking and realized that she knew everyone in the room. All of the eyes looking at her/us were full of  love and support. “What have you done?!” she breathed to me as she slightly shook.

The rest of the morning was a wonderful blur for both of us. Champagne was served as we said hello to everyone. Soon we were all gathered; the guests were assembled by Deanah’s uncle Frank, a United minister, in a simple semi circle around us. Our friend Chantal Chamberland, sang one of our favourite songs “At Last” by Etta James. Truthfully we were in such a blur that we didn’t hear it at all so we were so grateful when Chantal sang it again later! Our niece, Danielle had a reading for us, as did our 3 brothers. Our nephew Derek took our engagement rings for a moment and passed along our new wedding bands to our twin 5yr old nieces who brought them up to Frank- everyone had a role. It would have been unfair and impossible for me to have written vows and then to ask Deanah to wing it so I’d asked another one of our friends to sing a representation of our vows. Jim Cuddy sang his song “Pull me Through” and there were few dry eyes left in the room. It was all so lovely, and loving. We said “I will”, we signed the license (How I got that done is a whole story too!) and it was done!

Just about 70 people sat at two long tables to a simple, family style brunch. Eggs and bacon, champagne and…more champagne. Thank you to our covert bridesmaids – Steph, Stacie and Leanne, they had my back from day one, and even when Deanah didn’t know it – they had hers too. There were a few elements of the event that they “owned” – the wedding cupcakes were fantastic and the white tulip floral arrangements were not only gorgeous but exactly what Deanah wanted. An amazing jazz trio, Grooveyard, led by Michael Occhipinti and Lester Mclean played beautifully throughout the morning. There were speeches, toasts and roasts – mostly about the little lies that had been told and the fun stress of keeping all the secrets.

Conversation over afternoon cocktails in our room at the Ritz Carlton, at family dinner in the wine cellar at Barberian’s and then throughout our day in the Ritz Carlton’s Spa was an endless reveal of “What I didn’t tell you…”.  It’s good that I kept a journal of all those little things, but Deanah’s still trying to take it all in. I’ve heard the question “How did you pull this off?” quite a bit in the last two days – and I think that’s going to last for a long while!  Some amazing gifts in our room Sunday afternoon – Thank you to Patrick McMurray / Starfish Restaurant for delivering a pile of shucked oysters, and to our friend Erin Simmons / Veuve Clicquot for the champagne.

Who knew that techniques taken directly from some of our Olympic Preparation ideas would be such huge elements to ensure smooth surprise wedding planning!

I’m sure that when I get our photos I’ll share some more later – stay tuned for an update!