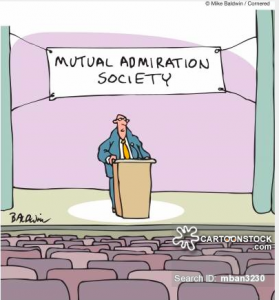 In closing, I’d just like to say thanks – you’ve been an awesome audience.

One of the benefits – theoretically – of aging is that as we gain experience and wisdom; presumably we become more competent. However, I believe that sometimes experience can also weigh against us. As we progress into a comfort zone of routine with the feeling that we know what we are doing, we run the risk of becoming less curious about all that we aren’t doing. At some point, because of our experiences, we inadvertently become closed off to the challenge of new or changing ideas. We begin to listen less: Been there, done that. But have we?

The trick to learning/improving is to make sure that we are putting ourselves in conversations where, at times, we either don’t understand or don’t agree with what we are listening to. Why? Because if we don’t, then we find ourselves constantly preaching to our own choir, letting them preach back, and learning absolutely nothing new.

“My biggest challenge is myself. At 23 years old, it’s not really easy to know yourself that well.”

Ah – the wisdom of youth. Wait what? Milos Raonic, the rising tennis star, made this comment at a Canadian Club event recently. In the last 3.5 years he’s made the jump from an impressive world rank of 37th (which might not sound like much until you realize that it was the highest ranking ever for a Canadian in men’s singles tennis) to 8th, and absolutely no one thinks he’s topped out yet. This player has a lot of game left in him and if this statement accurately reflects his personal awareness – it will come as no surprise when he becomes the 1st ranked player and holds that rank for some time.

Here is what I get from Milos’ quote. As much as he already knows and feels about himself and tennis, he is aware that to improve he must listen to what others know and see too. Having been coached to be world leading for almost 20 years myself, I can guarantee that Milos won’t always like what he’s being told to do or change but to get as good as he has, and to get even better, he knows that he has to crave this type of critical and creative feedback and be ready to try to apply it.

Socrates said, “The only true wisdom is to know that you know nothing”. Perhaps the explanation of the Dunning-Kruger Effect (DKE) puts this into better focus for the purpose of drawing in outside wisdom. The DKE says that the poorest performers are the least aware of their own incompetence. So, the less competent you are, the less aware you will be of your own incompetence. (Ignorance really is bliss!) The DKE also shows that really talented people tend to underestimate their own talent, mistakenly assuming that because a task is easy for them it must be an easy task for everyone else. Here’s the catch; as soon as you start thinking that you are at the talented and competent end of the scale, you risk being identified by others as unaware of your actual incompetence!

This is exactly why experience can be a burden. As soon as we think we know it all we begin to become those who know less. I’m not suggesting that we begin to forget information or lose skills. This is more about improving the quality of your knowledge and keeping up with current and emerging practices, not about the quantity. Don’t take what you know for granted, ask inquisitive questions and listen to many answers. 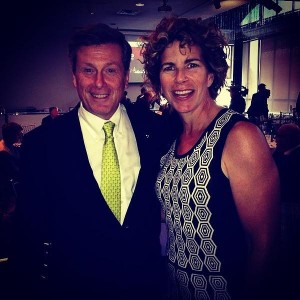 Last month I had the privilege of being part of John Tory, the new mayor of Toronto’s, transition council. From across the city, he gathered a dozen or so men and women who in one way or another each champion a voice, user group, or community in the GTA. The goal of our meetings wasn’t to come up with final answers – that will be done in council – but for John, in advance of officially taking office, to hear a variety of perspectives, possibly (hopefully?) different from what he had previously considered. As John listened and took notes, we debated and suggested unique concerns and solutions to issues that are Toronto’s most pressing concerns.

This 60-year-old Mayor, like the 23-year-old tennis player, knows that he has to be open to new ideas as well as critical and creative feedback. He has to be ready to try to apply this to what he already knows if he wants to make things better. Both of them maximize the trajectory of their success by avoiding the trap of assuming that their experience and what they know (and they have experienced and know a lot) is enough. If Milos can continue to employ this open listening strategy as he ages and matures then that will be how and why he becomes an unbeatable champion for years to come.

Having seen how John Tory doesn’t take his own knowledge and experience for granted, that he still actively seeks out a broad range of voices gives me a lot of hope for the City of Toronto. Finally, we have a champion at the helm who is going to build a strong vibrant “One Toronto”, but first, he knows he needs to listen to all of Toronto.

1 thought on “What are you Listening to? Communication II”