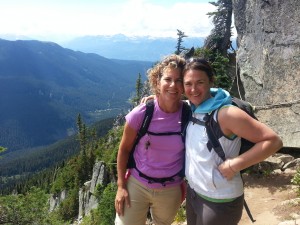 Summer holidays were amazing, but I let them take me out of my routine. I then found myself struggling to get back.

For the longest time I was in a routine of writing. At a minimum I would post something on the first of every month. I had fun keeping the self-imposed deadline since it meant I had to find a topic that had me feeling curious and inspired every 30 days (which comes around way faster than you’d figure!). I had an intended audience and I knew what voice I wanted to write in so my curiosity had some guidance. Those posts were almost always ‘mentor messages’ that I wrote considering athletes who were preparing for the upcoming Olympics. The last Olympics finished in February, the next aren’t for another 2 years, and that’s not my official roll anymore anyway.

My last post was in June and then I chose to take July and August off as a summer break. Now it’s mid-way through September and I’m so far out of my routine that I feel stuck.

I have been struggling a bit because if I’m not writing to an Olympic team who am I writing too? I get stuff in my head all the time but how do I want to frame it and make it purposeful? I don’t want to just ramble; I want to make a point. I miss writing but where, and why, does my new routine start?

I needed help to get me started again, but asking for the help was a bit… tough. Tough for no other reason than my ego was aware that most of the stuff that I’ve written about in the last 5 years was exactly the kind of advice that I needed to get me going. I’m supposed to be the expert here. I write often about being brave and bold enough to do something: to start, to just get at your goal-achieving path by starting with a simple small step. There I was, bogged down by the “doctor heal thy self” conundrum. It was so easy to be terrible at taking my own (good!) advice.

To get the help I needed, I knew what I had to do.

I had to talk to people and more importantly I needed to be honest. When people ask, “How are you doing?” or “You busy?” it’s a choice how I answer. I’m busy enough with some things but with respect to my writing, while I wanted to get at it – the truth was I wasn’t. My choices are to reply that everything is fine, or – with those who are close to me – I could choose to expose the fact that I have some gaps that I’d like to / need to work on. 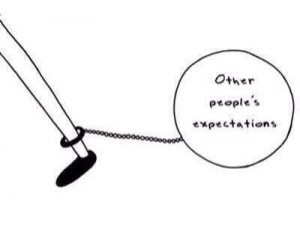 When I feel like this, more often than not the ball’s caption should read “My own expectations”

For sure I spoke with Deanah, she expressed her unwaivering confidence in me that I’ll figure something out and we spoke of my options. We looked at it from the perspective of what I want to do and what I don’t want to do. I also spoke with our friend Dr.Kimberley Amirault-Ryan. She has been a peer of mine in Olympic Prep and we always have the best conversations about our ambitions and the ‘stuff’ that we do. Through a wide-ranging conversation with her I came upon a possible “who” that I can write to. It was kind of a simple idea – why not write to myself? What would I say to me 10 years ago, or 10 years from now? I’ll let the moment or the topic decide which but…. Sounds interesting to me!

It’s a small start, but I feel like I might actually be unstuck. I won’t know until I find myself back in a routine of writing but it’s a start I needed.

So – Dear self (future or past) – never forget when you struggle, as much as you want to retract from everyone until you figure out how to ‘fix’ yourself, that’s exactly the wrong direction. Be brave, suck it up and expose your weaknesses and let the good people that you’ve surrounded yourself with help you. The hardest part of those conversations is starting them, and you never know which random chat will be the one that gets you going.

8 thoughts on “Out of routine – Getting unstuck”