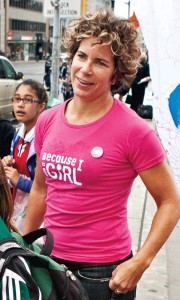 Now Marnie McBean promotes girls’ rights worldwide! Photo, courtesy of Because I Am a Girl

Marnie McBean is one of our most inspiring Canadians – yes, she’s a rowing champion and one of our favourite Olympians, but now she’s also championing girls’ rights globally with Because I Am a Girl.

Now Marnie McBean promotes girls’ rights worldwide! Photo, courtesy of Because I Am a Girl

This past summer, she acted as an official mentor for the Canadian Olympic team. She’s featured in our October issue of Canadian Living, but when our intern Erin Morawetz interviewed her she had so much to say, we thought we’d tell you a bit more about Marnie, her mentoring ways, her new book, The Power of More, and her memories of each of her Olympic Games.

Because if there’s one thing that Marnie does well – other than row, that is – it’s inspire.

How did you mentor the Canadian Olympic team this past July?
I wrote to Olympic athletes every month. I found it helped them close the gap between where they were and where they wanted to go by highlighting different tools that they could use to help them stay focused.

How did your career shape your attitude toward mentoring?
When I look back on my rowing career, my gold medal races are not my favourite days. Those aren’t the days I look back on with the most pride. I look back at some of the hardest days that I had the most struggle and had the most reasons to stop and quit (but) I didn’t. The things that I’m the proudest of aren’t my successes, but my struggles.

Why did you write your book, The Power of More?
As the host nation of the 2010 Olympic Games, Canada walked in last during the opening ceremonies. As the team mentor, I was at the very back, the last Canadian. I remember watching the pace and the rhythm that the team was walking and it just struck me that they were overwhelmingly ready. I remember being so proud to be a part of the team.

Mentoring sometimes is a bit like parenting or teaching – you don’t always know that the people you’re talking to are listening. But as the Games unfolded, almost every athlete was coming up to me and thanking me for the emails and the messages and the work I’d done. That positive feedback inspired me to write about mentoring.

What are some of your favourite Olympic moments?
I remember at my first Games in Barcelona [in 1992] the week of rowing was a blur. On the middle Sunday of the Games, 17 friends and I – so 18 rowers – had gold medals. Six of us had two. I remember walking around the Olympic Village a few days later and just feeling like I belonged. The Village is a contained town of 10,000 people, and everyone is trying to win a gold medal. That was such an incredible moment, knowing that back in my room, I had two gold medals. As normal as I was, I knew I belonged there.

My favourite Olympic moment in Sydney [in 2000] actually occurred before the Olympics. I went to Sydney to race the single [sculls event] and I ended up having to withdraw because of a back injury. But my teammates took care of me. I went from a point where I was training three times a day to where I couldn’t stand for three weeks.

By the time I got to the Olympics I was able to stand, and I did walk in the opening ceremonies with my team, but those Games were the first time I really learned how kind people can be if you let them. I’d always been just too independent. And it was probably there that I started learning how to give back. Letting people help you is as powerful as helping other people.