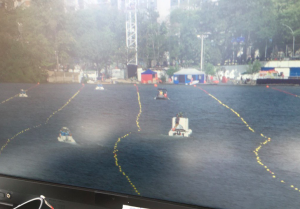 Middle of the course awry. Wind and waves are creating havoc on the Olympic Rowing Regatta

Rowers have joked in the past that God must be a rower. More often than not, Olympic Rowing conditions have been consistently excellent.

There have been short delays here or there but it’s been a long time since an Olympic regatta has been so wind effected. And – I think the last time one was SO disrupted it wasn’t even the Rowing regatta – it was the Canoe Kayak regatta in Sydney (2000). The two sports share a venue; Rowing is always week one and Canoe/Kayak is week two.

People were furious, why wouldn’t that international federation and the IOC delay until conditions improved? They couldn’t – the Closing Ceremony would start in a few hours; all sports had to be completed.

I believe FISA, the international rowing federation, took a long look at that situation and made a decision to give rowing some flexibility if that were to happen in (their) week one.

Rowing used to begin on Sunday – day 3 of the Olympics – and the regatta finished on Sunday with Canoe Kayak beginning the next day. That gave rowing no ‘wiggle’ room to reschedule. FISA changed that. Now the Olympic Rowing Regatta begins on day 2 – the morning after the Opening Ceremony – and should be completed on the Saturday. This gives the venue a day to convert from rowing to canoe/kayak, but also it gives FISA a chance to find best conditions.

I would suppose that as far as FISA and their Fairness Committee are concerned – this week is a nightmare. Delays are hard on everyone. Athletes have been trying to peak perfectly for a moment in time for years, friends families and fans have spent a lot of money are trying to make sure they’ve the right ticket on the right day, TV networks are trying to juggle how to show everyone everything and FISA needs to figure out how to keep racing fair. (I’ve heard that on-line ticket systems are not co operating well with ticket exchanges. I can only imagine the exhaustion and stress that loved-ones are going through as they pass the “off” days trying to change their tickets (regatta and sometimes airline tickets and hotel bookings too) to the next right one.

I know that FISA study weather patterns – daily and long range – and I wouldn’t be surprised if they have found themselves between a rock and hard place. FISA isn’t responsible for the weather – the best they can do is stay as connected to the expert weather forecasters and look for windows of opportunities. (I have to admit – I often joke the weather forecasters and pollsters seem to be the only people who keep their jobs even though their predictions are so often way off).

Saturday morning’s conditions were terrible – but the week at a glance wouldn’t have given FISA much hope for consistent improvement. Should they have postponed the first day? I read on Sunday, and FISA would have known, that Wednesday and Thursday were supposed to be really bad. (Wednesday has in fact started off with a postponement.) So what were they to do? There are only so many days they can push forward to.

Heats are important, but in light of the continued bad weather – I’m glad that FISA didn’t delay into precious blocks of better racing weather. All other rounds are knock-out rounds and FISA needs to protect those.

The new schedule with 4 days of finals also gives FISA increased flexibility. This new Olympic and World Championship race schedule sets up relatively short days. So even when they merged 2 days on Monday– it was just a 5-hour schedule. FISA can use the afternoons and, worst case-scenario they have Sunday as a reserve day.

No one dreams that.