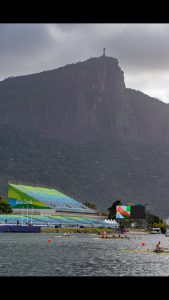 My “pretty sure” they’ll win a medal tap goes to Canada’s women’s’ lightweight double. They could easily be considered the favourite to win this event – but their racing style is just SO volatile and dramatic that it’s hard to bet on. If Lindsay Jennerich and Patricia Obee win the Gold medal, it will be an incredible made-for-TV event. These rowers don’t tend to find world-leading form until the last 350m of the race, which for many rowers is just WAY TOO LATE! It’s heart stopping if you’re in their cheering section. It’s not unusual for Jennerich and Obee  to be “open water back”, in last place with ¾ (1500m) of the race completed to then fight their way to the front, crossing the finish line first.

Jennerich and Obee have shown time again that they have the belief in each other and their final sprint that they can make this happen. I believe if there is a head wind (a long, slower race) … they will probably win. If there is a tail wind – which means the last 350m will happen faster— I don’t know if they will have enough time to power through the field.

So – If there is little to no wind… be ready with the defibrillators! It will be a heart stopper to see how much they can recover on some very talented boats.

Their first race is on Sunday. They would like to be one of the first two boats so that they can go directly to the semi-finals, avoiding the repechage (rep). These athletes are pretty professional with their weight so an extra day of weighing in isn’t so terrible… but it’s always an advantage to skip the rep. and have more recovery on their way to the final. Let’s watch the wind and see how they move through the middle 1000m (from 1500m – 500m).

Canada’s other two best shots come from the heavyweight men; the men’s quad (M4x) and the men’s four (M4-). Both of these boats are close in a tight field, which means anything can happen. If they find themselves totally in the right space with the right groove, I can see either of these crews winning a bronze medal which, I’m sure Rowing Canada would heave a sigh of relief! They made the decision 4 years ago to break up the men’s eight which is 9 guys and one shot at a medal and go for a number of smaller boats; now 8 guys going for two medals.

A quad is an extremely technical boat and fast, tail-wind conditions always serve to make it exponentially harder. The Canadian men are rowing it very well – but I think their best chances come with just a little bit of head wind. Last year they got rowed down in the last 500m of a couple of races, and I don’t think this was because they were running out of gas as much as because they just weren’t as efficient as the other crews. Canadians just don’t have sculling in their DNA as much as the Europeans. A slight head wind would really level the field technically and bring out the strength, fitness and determination of the Canadians. (Yes – all crews at the Olympics have this – but these will be the Canadian M4X’s strengths).

The M4x races on Saturday – and it’s easy to say it will be an extremely close race across all 5 lanes. Canada needs to be in the top 2 to advance directly to the finals and avoid the rep.

I think the opposite might be true of the men’s four (M4-). They need the conditions to take size out of the game (or at least equalize it) so they can really capitalize on being feisty. This “True North Four” as they have dubbed themselves can thrive, I believe in perfect conditions. Their first race, a 4-boat heat with 3 to advance is exactly the kind of hurt-locker kind of race they can really sink their teeth into IF THEY KEEP THEIR SWAGGER TOGETHER! The thing with a race like this is that you go into it, with the thought “anything but last” in the very back of your mind. If you’re not careful that can lead to panic. Panic leads to lack of unison and that equals slow. Of course in the front of your mind is “We’re winning this!”

The “anything but last” motivation is what makes the Olympics SO compelling to watch. It will bring out the desperation to achieve… and if you can harness that AND keep your technique and unison – well… then you can go pretty far and fast at the Olympics!

This is the OLYMPICS! The consequence is so high and the performances are so compelling! I’ve been to 6 of the last Olympic Rowing Regattas and there hasn’t been one where all the favourites won. I don’t even think most of the favourites win. There is always an underdog, a crew that no one saw coming who had enough faith in themselves to make their Olympic Dreams happen. I’m going to be glued to my set…  wishing for the very best – the very best races – for Team Canada.

W1x              Starts racing on Saturday – In this high volume field, Zeeman needs to be top 3 to advance to the quarter-finals. This is a very winnable race for her. Depending on how the later rounds/draw plays out – getting into the Olympic Final will be a challenge, but if she gets there it will take a dream race to put her on the podium. Carling Zeeman is a rookie Olympian and is in a position to become a real player in this event going forward.

LM4-             Starts racing on Saturday – This event is always deep and tightly contested. Unfortunately Canada hasn’t really shown that they can put themselves into a big final … but it’s the Olympics and there is a reason they don’t mail out the medals before the start of the race!